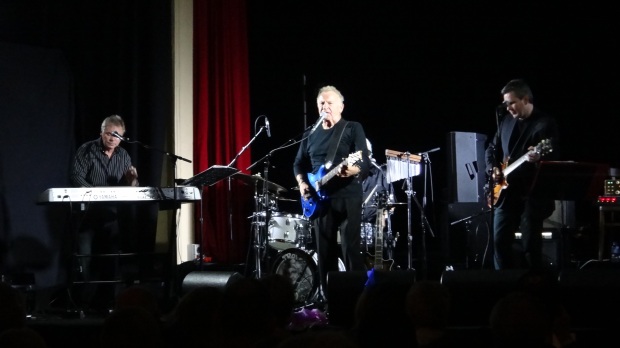 Last Saturday I had the pleasure of attending Normie Rowe’s FRENZY! Album Launch at Memo Music Hall at the St Kilda RSL. It was such an incredible night and I wanted to share some details with you all and encourage you to all go see him if you ever get the chance.

Sometimes opportunities come my way and often I have no idea what to expect. Attending this album launch was one of those opportunities – but also one that I didn’t want to pass up. I had listened to his latest album, of course, but having not been alive during the sixties and seventies when Normie was at his career peak, I could never experience the same feelings that people who did live through that could. I can only imagine what the feelings of nostalgia that others may have experienced so I went in as quite a novice of his music.

I was never the less excited to see him so last Saturday night I headed into St Kilda with a family friend to see what it was like. Firstly what struck me was how beautiful the venue was with its art deco features and vintage posters. It felt like you were walking into a place of history. It felt like the perfect place to celebrate Normie’s fifty years in the music industry, not forgetting that the theatre is where Telfil Studios once stood – the place where Normie first recorded It Ain’t Necessarily So. Whether others were aware of this fact or not, I felt there was a special excitement in the air because of this.

The theatre also boasted two bars, an upstairs VIP area and many candlelight tables. There was a definite pub vibe (that may have been contributed by the booze) but also a touch of elegance too. It may seem like I’m going on a lot about the venue but it has to be one of the most beautiful venues I’ve ever attended a concert to – it’s definitely not the Corner Hotel, I tell you what!

I’d never heard of the opening act, an Australian group from the 60s called The Wild Cherries before the night but I thought they were divine. They played an array of classic songs and some of their own, which got a lot of the crowd off their feet. Well, those that could. I mean, I did feel very young in the room as 99.9% of the audience were over 50 years old. I expected this and looking young has never bothered me, but I did feel better when I saw some young boys in the room as suddenly I didn’t stand out too much being there.

There was a short interval before Normie hit the stage. Suddenly the room tripled in size and there was an excitement in the air. It was palpable. You could immediately tell how much the crowd loved him. I’ve attended many concerts in my 20-something years on this planet but this was definitely a love I’d never witnessed before. I guess it’s something that happens when you’ve been a fan of someones music for such a long time. I don’t really know how to explain it, I mean, how could I? But it was there, I felt it.

Before the show, Normie walked through the audience stopping to chat with people, many appearing to be friends I would say. I noted how the ladies took every opportunity to touch him and/or rub their hands down his back as they greeted him – a more subdued subtle-way of showing affection compared to the days when women would try and tear Normie’s clothes off at his gigs.

It felt at times like I was watching a legend. Not only a music legend in his own right but someone who you could tell has really done the hard career yards and not only worked at his craft but developing a stage persona and confidence that was first rate. Normie knows how to work a room and the audience just lapped it up.

I favoured his faster songs more than his ballads, but the performance as a whole was brilliant. The New Playboys also were top notch – I personally thought the guy on the keyboards was especially good. After the show, Normie generously gave time to sign autographs, take photos and engage with his fans. It’s a nice touch that a lot of artists sadly feel “it ain’t necessarily so”.

For more details go to: www.normierowe.com.au