If you are drawn to alternative pop music that blends in an orchestra sound, then you may just enjoy Project Montreal’s debut album, Patterns. I spoke with Ryan Wyatt about his four year creative journey, how the experience has shaped him musically, and whether he has any future aspirations brewing.

Firstly, how would you describe Project Montreal?

It’s a bit of a weird one, but I’d say just alternative pop. I like that term – you can throw just about anything in to the mix with the word “alternative”. The name, it’s a bit of a long story, but I remember back at Uni, we used to have competitions about coming up with names – whether it be like a clothing brand or something. One day we were doing band names and I told my friend, “Project Montreal, that’d be a cool band name.” And he was like, “Man, that sucks. That’s such a shit name!” So I was like, I’m going to show him. (laughs)

Alternative is very different from the jazz guitar you studied at school, does that mean you were the cool kid or a bit of an outsider?

My Mum says I’m cool. (laughs) I got along with everyone okay. I was pretty indifferent. You’d have to interview other people – I don’t know. I was listening to a tiny tiny bit of [jazz]. Jazz is a really good medium; it covers all your theory basis. It’s the kind of ‘need to know’ as opposed to classical, where there’s a lot of unnecessary stuff. I was more listening to music that was influencing me in sound for the record, bands like Radiohead, electro, or orchestral stuff. Just a real smorgasbord, so it was very non-jazz.

So, then how does one go from studying to then recording an album?

When I was getting towards the end of my studies, I had a choice to go into post-grad study – and I didn’t want to do that for the rest of my life or even for another three years! I’ve always sat back and gone, well, I’ve got all of this so-called information and ability (you’d study stuff and arrange) I’d love to do something with it! That was really it. The challenge was too good to pass up.

I started talking with [Grammy award-winning arranger and pop music icon] Van Dyke Parks when I was in Uni. Just cold called him about questions and arranging, and we started talking via email, and then once I had enough material I thought I could put a proposal to actually work together.

You did a lot on this album too – perform, arrange, sequence, orchestrate, song writing,  vocals and co-producing. Would it not have been easier to lean on other people on your debut?

That was the challenge, [and] musicians aren’t exactly the most punctual or reliable people I’ve found (laughs). There was a small team of people. There was a producer and engineers, musicians and arrangers, artwork – and people try to put pressure on you, but at the end of the day, you know you’re in charge and you’re paying for it. I’m lucky.

Did you have a clear idea of how you wanted the album to sound, or was it more of a hit and miss, trying different ideas, seeing where it lead kind of thing?

Yes and no. You had a definite direction you were heading in and each song had its idea but  it wasn’t an album where you have a body of work that sounds like this. I was kind of treating every song on its merits. When studying, you’re restricted – you’re studying jazz guitar and you’re restricted in the sounds you’re working with; and [then, now] putting yourself in a position where you can pretty much write for anything, and wanting to explore all these different sounds and textures and all that sort of stuff – I couldn’t help myself!

You’re just running off in all these different directions. You’re exploring your interests – that’s what it was for me at the time. You’re just doing what you’re doing and everyone else can work it out. I’m under the opinion, once you write something, it’s none of your business what people think of it. I really just enjoy writing music and if people like it then cool and if they don’t, that’s cool too. 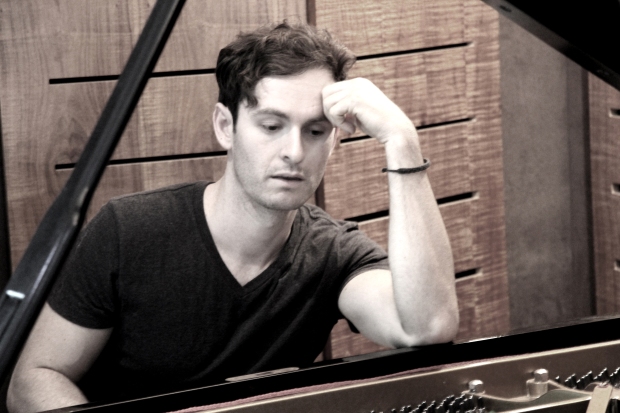 Do you have ideas for a second album?

I’ve got a lot of ideas. I’m focusing on this album at the moment and playing live, and then worrying about a second album when the time gets closer. I do have the ambition to take more film work and things like that. That would be really cool. Composing music for films and stuff like that, I think ideally that’s where I’d like to see myself in ten years time.

You recorded the album over three continents – why did you decide to do that?

That was just the way it unfolded. Part of it was arranged in the States, the bulk of the recordings were done in Australia [and] all the orchestral stuff was done in Prague. It was just one of those things where when we went through different stages of the record, we thought where’s going to be the best place to do this.

There are many layers to your songs. How do you go about crafting a track?

I went a bit layer crazy I think! (laughs) Usually, you’re starting with some beats or a vocal idea, or you could just start with lyrics or just a lyric. I was doing a lot of transcribing of just pop music – all the piano or guitar so you’re kind of boil everything down to really basic elements to see what kind of concepts and ideas are going around. That’s how I tried to write from that point – really basic and then you can build things and put things up from there.

The cool thing about the process was with the song writing, everything was written in a very basic form early on, so most of the songs were written at a piano or a guitar. A song had been written and there was an arranging, a pre-production process – it was enough space between everything for ideas to grow in a sense. It’s not like you have studio time booked and you’ve got to make a record and everything in a month.  All the ideas had room to breathe and grow from themselves.

I take it you don’t perform live with a full orchestra. So what are your live shows like?

The big ensemble is a four piece – the drums, bass, I do guitar and keyboards, and then there’s another guitarist and keyboards. [Also, we] rig a laptop set up where we run all the orchestral stuff and extra keyboard parts, samples and things run off that. It’s a bit of a rig when we’re running the full blown top gear set up.

It’s the actual recording. We don’t want to have to lug live string players or horn players around. If logistically, it was feasible and possible, absolutely, but I think the thing is the orchestra’s in Prague too. I don’t think they’d want to come out and play a club show with me in Australia (laughs).

Where do you take the album from here?

[I’m] really enjoying the live thing at the moment, getting out and playing shows, meeting other bands and a few little festival things here and there – let things run its course and see what happens. Make another record, get into filming, I dunno. I genuinely don’t think too far ahead with that. Film, make more music – it’s just like whatever takes my fancy first.

The Sound of Music is really cool. I’ve got a bit of a soft spot for some of the old musicals. But, I think the reason I like the idea of film is someone else has already done the leg work and had the idea. Your only purpose is to come in and bring purpose to someone else’s idea. It’s a lot less work than having to cook something up from the very beginning, go through every stage, the logistical side of things, financially [and] then having to be creative on top of that. I like the idea of just coming in and trying to add value to someone else’s idea.

Is that something you learnt from doing the album mostly all yourself?

The first time you do something you learn a lot of lessons on how you can do stuff better. The idea of making another record like that just makes my back numb. I can’t see myself wanting to logistically make something that’s so absurd.

Doing so many roles on the record, that’s why it took time. You learn a lot of things. Not only about what you’re doing but about yourself as well. It was a very enriching process in that way. That’s the thing I’ll take out of it – knowing that you’ve put the effort into something you believed in. That sounds really corny but I’m 100% glad I did it. The thing I’m most proud of is  the effort that you’ve put into something to complete it. Wouldn’t change it. It was a great experience.

Thanks Ryan for the chat. Let’s talk album #2 in four years time (laughs)

There’s no way I’m taking that long to do something. I’ll make like a two-track EP. (laughs)

For more on Project Montreal, go to: projectmontrealofficial