What: Come from Away – the remarkable true story
Where: Comedy Theatre, Melbourne

It’s difficult to grasp what the fuss is about if unfamiliar with the Tony Award-winning musical, Come from Away. From the outside, it appears a modest production of limited size, with a small cast, sans bells and whistles, but for all it lacks, it more than makes up for with its strong themes, enormous heart and triumph of the human spirit.

Come from Away tells the remarkable true story of the 6,597 passengers from 92 countries who found themselves stranded in the small town of Gander in the province of Newfoundland and Labrador, Canada, the week following the attacks of 9/11 in 2001, and the generosity and kindness from the local residents who housed them.

For a musical based on such a heavy subject matter, it never truly feels weighed down by it. It certainly plays with shades of light and dark, but its more a celebration of how tragedy brings out the best in people. Throughout this powerful show (note: there’s no interval), you learn their stories, watch friendships form and see romance bloom.

Although littered with one-liners and situational humour, the story doesn’t shy away from harsher truths, like homophobia, xenophobia and paranoia. Knowing these, too, are real events leave you feeling ill and uncomfortable. Though never lingering on it for too long; these moments stay with you long after you’ve left the theatre as much as the joyful ones do. 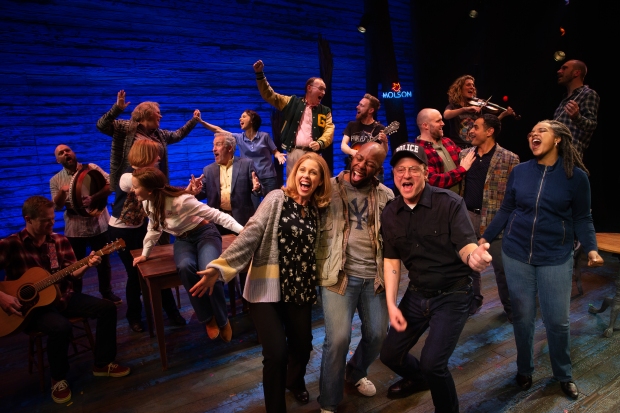 Performed on-stage by an eight-piece band, the music itself is catchy, contemporary and heavily Celtic-influenced, yet not overly-memorable. However, unlike some musicals where the repertoire is key to the show’s defining success, the music here is a mere accompaniment to the educational eye-opener for those unfamiliar with (or perhaps too young to remember) the event’s historical significance.

With music and lyrics by Canadian husband-and-wife team, Irene Sankoff and David Hein, you’d be hard pressed to find someone who doesn’t walk away taking something extra away. With its universal appeal, very rarely does a musical feel so uplifting, warm and refreshing while taking you on an emotional 100-minute roller-coaster. Come from Away has it all – and still leaves you wishing you were in Newfoundland too!

The true definition of the word ensemble, there are no lead actors, making it difficult to pick a stand-out performance. Each member of this impressive twelve-person cast plays a handful of distinct residents and passengers. This could have been potential for confusion, but it’s done in an easy-to-follow manner through mannerisms, accents and costumes.

Come from Away proves that even with an idle set and few props, it can stand its ground against the heavy-hitters and still be one of the best musicals of the year. There’s unlikely to ever be another musical like it. I loved it! Believe the hype – it’s there for a reason.