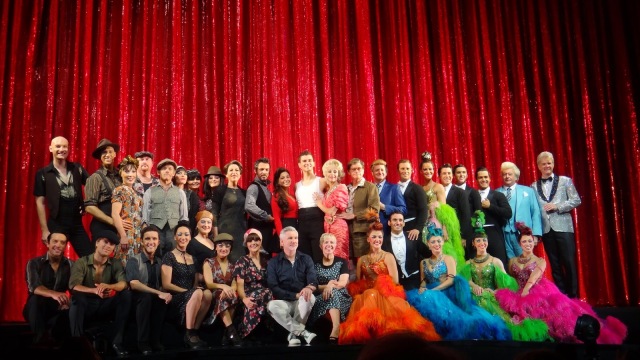 The cast with Director Baz Luhrmann and Set/Costume Designer Catherine Martin bottom centre.
All photos by me.

If you haven’t seen the numerous posters, the sound of a song in the air or maybe you actually have been living under a rock for quite some time (I hear the rent is cheap this time of year) you would be unaware that Strictly Ballroom the Musical has landed in Melbourne. But in all seriousness, shame on you.

Based on Baz Luhrmann’s 1984 movie of the same name; the story tells of ballroom dancer Scott Hastings (played by Thomas Lacey) and novice Fran (played by Phoebe Panaretos) as they try to dance their way to becoming Pan-Pacific Grand Prix Dancing champions.

Thanks to Nuffnang, a group of bloggers were invited to attend see a three-song preview of the show presented by Baz Luhrmann himself. Details under the cut =D

Some interesting tidbits:
– Baz spoke for his love for Her Majesty’s Theatre. He said at the preview shows, people got up and danced in the aisles.
– Catherine said that Baz is the kind of person who will work on something until the film canastas are out of his hands, or until the time the curtain goes up.
– Baz and Catherine both mentioned how much they like collaborating with people.
– Baz spoke a lot about how Ballarat (and its surrounding areas) has produced so many great talents.
– Catherine hadn’t yet had a chance to discover the shopping in Melbourne as of yet, but she had been trying to sneak out to Scanlan Theodore for about three days. But she is a shopper and she has been looking online at the local labels. Baz said he was at the opening of the Melbourne Emporium and admired the effort all involved went through to bring all the Australian designers together into a major shopping centre. They both said that being in Melbourne is a completely different city-experience than being in Sydney for the fashions and foods etc. Catherine said we are very lucky to have two cities so close together in size that provide such a different cultural experience to each other. Baz said Melbourne is truly a great place to go for theatre, for fashion and for food. He also spoke a lot lot more about Melbourne’s grid (like New York), Sydney being divided by water (like San Francisco) and South East Asia.
– Baz spoke a little about the longevity of shows. He spoke of how Wicked had a rocky start during its first run and only lasted four weeks instead of its hopeful run of a year. As with La Boheme in San Francisco before “smashing it” once it came to Broadway.
– Baz said Strictly Ballroom has received great audience reviews but people consistently come out of the musical and the movie with up lifted in spirit.
– Baz said some of the musical numbers have evolved and there is a number of new songs added which he developed with Eddie Perfect, Elliot Wheeler and Australian singer-songwriter Sia.
– On January 15th 2015, it had been one year since the cast and crew had been together working on the show. Baz said they all started great but “they have never stopped evolving their performances, developing their instruments, pushing detail (and) trying to everything they possibly can”.

Photos during A Life Lived In Fear. 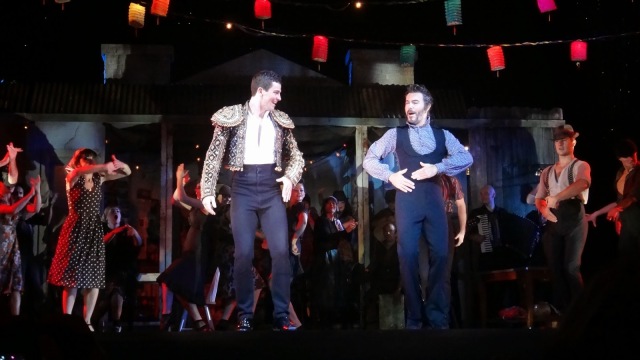 Photos during Time After Time. 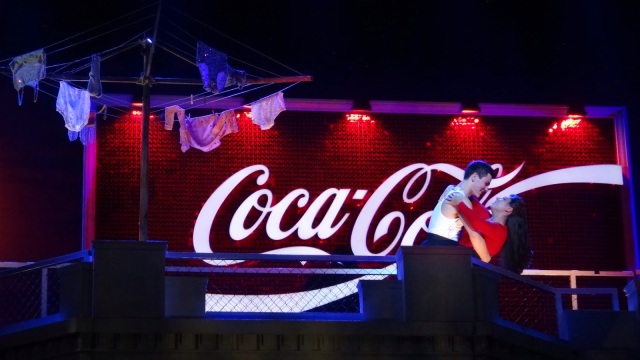 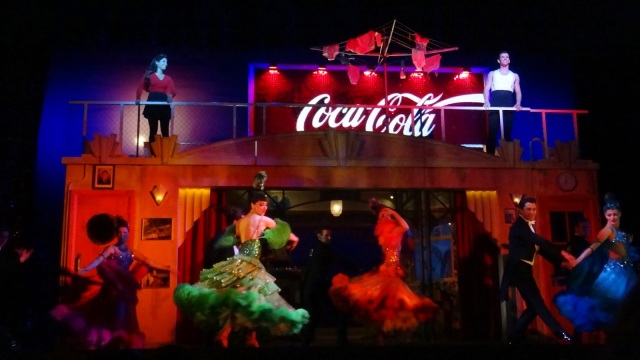 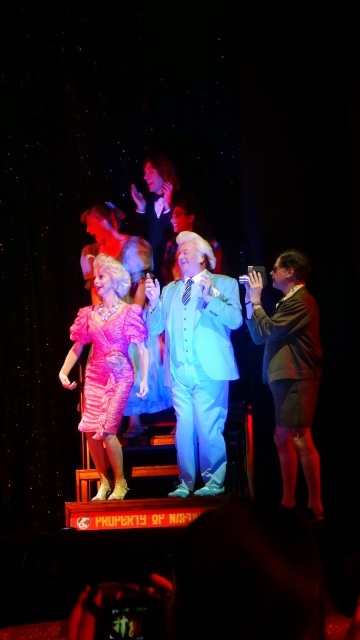 When asked if the story of Strictly Ballroom was based on his life, he said yes to a certain degree. He spoke of how he was a ballroom dancer as a child, before later bringing his brothers and sisters into that world and how his mother later, too, became a dance teacher.

“I became very interested in the universal myth which is an underlining story that unites audiences through time and geography. So the idea was to take that idea and focus … and put it in a world that we knew – and that was the world of ballroom dancing. There are characters in it that I have drawn some qualities from people close to me but we won’t go into that. ” — Baz

“So yes, I was a ballroom dancer but I wasn’t Scott Hastings. I did well (and I) won a few ribbons. Actually, what’s really interesting (is) the beautiful beautiful man called Keith Bain (1926-2012), who was the movement teacher at the National Institute of Dramatic Arts (NIDA), A true legend, came from the same country town as I did and he went on to choreograph Jesus Christ Superstar. He told us as he was ballroom dancing (with strict rules, can you imagine (as) it was the 60s) was his first experience of dance. He used to make up his own steps and he used to get what they called “carved up” – which basically means what happens to Scott Hastings in (Strictly Ballroom) – and because of this he left ballroom dancing and went on to doing his “own thing” called “becoming a choreographer”, and went on to becoming one of the great choreographers of our country. And to a certain extent, I think when I was at NIDA, I was on my own journey of doing my own thing, following my own creative path – and to go out on that road you have to become comfortable with becoming “carved up” from the all powerful Federation. So, it works both ways as a metaphor for what was going on in life then but the story was drawn (and) the character of Scott Hastings was truly drawn from Keith Bain’s journey.” — Baz

I dare you not to be dazzled when the giant disco ball fills the theatre with twinkling lights. It was most magical – think, seeing fireworks for the first time – just like that.
Time After Time is one of my favourite songs – especially when performed by singers with a musical background. See Hayden Tee’s Time After Time. Love. It reminded me of that.
—

After the preview, we were able to have a look at what goes on backstage. Did you know there is more wig changes in Strictly Ballroom than was in Phantom of the Opera, or that the sparkly stage curtains  cost more than $1000 per yard? That’s a LOT of money spent on sparkly fabric!

We got to see ‘Wall of Fame’ where all past and present performers at Her Majesty’s Theatre sign their names. Grease, Mamma Mia and Eureka are just some of the shows you can see pictured – but there were numerous shows on the almost endless hallway. 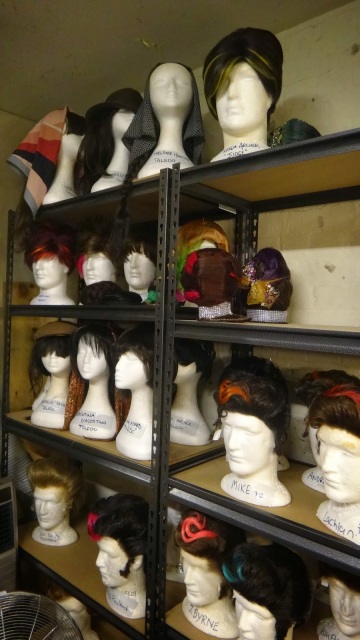 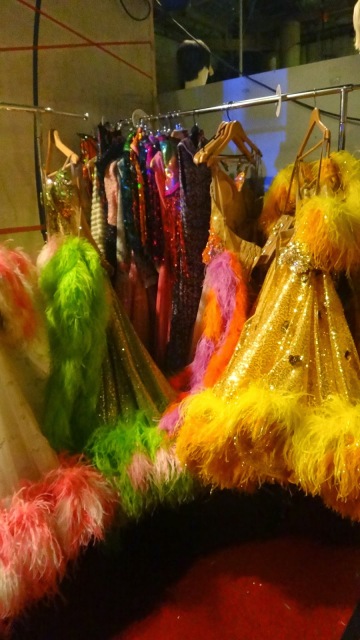 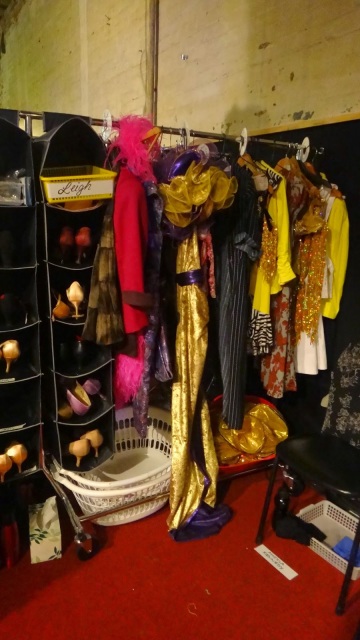 The costumes are so lavish, colourful and detailed. This is the ‘quick change’ area backstage.

Thanks for reading!
– M