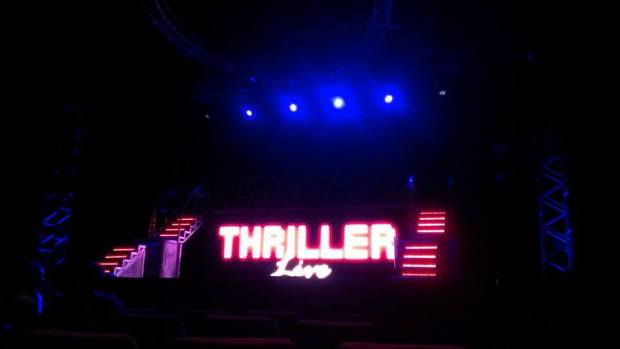 Last night I was given a last minute opportunity to go see THRILLER Live – so of course, I was going to take it! I didn’t know much about the show but I was definitely curious … but it wasn’t at all what I was expecting.
Details under the cut!

Instead, the best I can describe it, is a tribute show – meaning different singers singing MJ’s greatest hits with back up dancers and some minor trivia thrown in the mix.

I thing that surprised me the most was how much I enjoyed it! I cannot believe the caliber of talent that was on that stage! Although, I am a little disappointed that most of the cast weren’t from Australia, just because I believe if you’re going to bring the show here why not use local talent? But hey, that’s just my opinion. Maybe Australia has a lack of MJ lookalikes? Who knows, but Australia’s Prinnie Stevens from TV’s The Voice dazzled as the female lead.

Oh, also I am 99% sure that Sean Christopher, who played Michael Jackson, was lip syncing and (as far as I can tell) no other performers lip synced, so that took me out of the moment for a little while. Also, for a show that is about Michael Jackson, there wasn’t a lot of MJ per say. But man, oh man, can he dance! Superb dancing!

There were interactive moments with the crowd which were fun. The audience was split into two and we were asked to sing ‘scream’ and ‘shout’ when promoted. And naturally, at times the audience was invited to dance, sing and clap along during other songs – especially towards the end where the whole audience was up on their feet. To which I am convinced that even if you weren’t a Michael Jackson fan, you would be loving every second of it!

I thought that the lack of sets would annoy me but it didn’t. In my opinion, it provided the perfect opportunity to showcase the dancers and performances – nothing else was needed that wasn’t brought through costumes, lights and projections. The costumers were a-ma-zing! Simple yet with enough pizazz to really enhance the show visually. I especially like the nerd-esque costumes during Blame It On The Boogie and I loved every second the hot boys were in their delectable three piece suits. Although, the dancing in Dirty Diana made me somewhat question my sexuality. I love the mimicked twin dancing they did. Just – wow! I have no words.

The stand out song for me was definitely Earth Song. Not only did lyrics portray a powerful message, but the screen projections also of the lush green earth turning to the harsh orange and red tones of destruction we are causing to this planet. No one moved during that song; the energy was palpable. Earth Song followed They Don’t Care About Us which also had the same kind of vibe but to a lesser extent. Still, a favourite for me and many there, I am sure.

Thriller scared the bejesus out of me! I am SO glad I wasn’t in the first two rows to have zombies all up in my face. I would not have slept for days. And the Thriller costumes weren’t even that scary, so go figure lol.

I would not normally say this but I would recommend the show to absolutely everybody. It was so much more than I expected and I was not at all disappointed with the show as a whole.