Last Thursday, I headed to the Portland Hotel in Melbourne for a comedy gig. Dave Callan headlined with Bart Freebairn, Nick Sun and Karl Woodberry as support, and special surprise guests Dave Hughes and Lawrence Mooney. There may have been more but I was backstage doing interviews so I unfortunately cannot say …

For an almost 40 year old white man, the man can dance! It’s kind of awkward and slightly uncomfortable to watch, yet hilariously funny all the same! Apart from his opening dance, topics included recent music videos, job opportunities, cats vs dogs and comedy in Australia and more. I also do love a show when there’s audience interaction.

I could re-tell all and ruin the jokes for you, dear reader, but I’m not going to spoil things. I’m still laughing about it now, so that’s the sign of a show well enjoyed.

Although, I don’t think I will ever get the image of Dave Callan in his underwear licking a sledgehammer at Bunnings out of my head. Like, ever!

And, if that doesn’t interest you enough to go see him live, here’s a snippet: 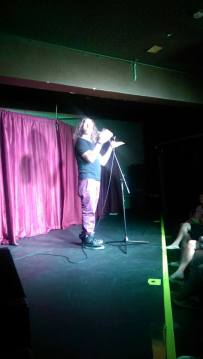