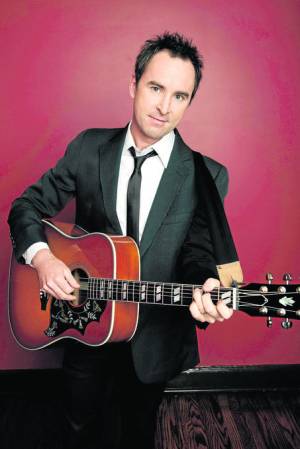 Damien Leith first came onto our radar taking out the title of Australian Idol back in 2006. It’s been almost a decade since – and this ARIA-winner sure has been busy recording a total of 7 studio albums and publishing 2 novels. This month saw Damien release his 8th studio album Songs From Ireland – which is just that.

Congrats on the new album, Songs From Ireland. Why did you decide to record this kind of album this time around?

I’ve been meaning to record an album like this for a very long time. A number of years ago I wrote a play called The Parting Glass for the Adelaide Cabaret Festival and that show features a lot of these songs – seeing the reaction the music got was definitely the catalyst for recording this album.

You use a lot of traditional Irish instruments; was it neat playing around with different sounds and instruments not normally heard in mainstream Australian-release music?

Absolutely. On this album we used traditional Irish instruments such as the Uilleann Pipes and the Bodhran to really create that authentic Irish feel along with fiddle, tin whistle, banjo and mandolin. I love that the album sounds really organic and warm.

I read that you wanted the album to have the traditional Irish elements but staying true to your personal sound. What is hard finding the balance between the two?

Not as hard as I thought it would be. I discovered while recording the album that my personal sound really stems from my love of folk and celtic music which made recording this album a very natural process.

It must have been hard to choose the songs for the album. How did you decide what songs would make the cut?

It was very hard – there are so many different songs to choose from. I always lean towards the more traditional side of Irish music and on this album I wanted there to be a good mix between big heartfelt ballads and strong rousing numbers. Because of my play, The Parting Glass – I already had a selection chosen for that, which helped in creating the track listing.

When I listen to this album, I couldn’t help but be transported to that local Irish pub with an pint of ale in my hand. Was this album a genius ploy to increase tourism? Seriously though, did you want people to be transported to another place through the music?

Honestly, since the album started in my play The Parting Glass which is set in an Irish pub, definitely the aim of the song selection was to bring people a little closer to Ireland. I love nothing more than going into an Irish pub and hearing a group of great musicians playing songs like these, that ‘session’ feeling is something I was hoping to achieve with the album.

Danny Boy and Carrickfergus are some of the most recognizable songs from Ireland. Was there not necessarily pressure but hesitation to cover such famous songs?

Iconic Irish songs are always a little bit daunting to record because you want to give them something new, something of yourself, but at the same time you don’t want to stray from them too much or otherwise you could ruin them. At the end of the day, for these two songs I decided to not focus on the arrangement as much as focusing on just delivering really heartfelt vocals.

Was this album harder to record being that Ireland is so close to your heart – and do you think this will come into play when performed live?

Actually quite the opposite, I think this was possibly the easiest album I’ve recorded to date. There was such a feel good atmosphere throughout the recording process and working with my family on the album just made the whole experience feel like ‘coming home’ in many ways. Being back in Sun Studios, a studio that has great memories for me was also fantastic and likewise working with producer Pat Donne.

Why did you decide to feature vocals by the late Bing Crosby on the album closer “Galway Bay”? It’s such a new concept and a lot of people still have strong ethical issues with using recordings from those who have passed; was this a concern?

It was definitely a concern and so we worked closely with The Bing Crosby estate to make sure that they were really happy with how we approached recording the song and likewise how we made the video.

What was it like working with Sharon Corr from The Corrs on the album opener “Black Is The Colour” and how did the opportunity come about?

Working with Sharon was fantastic. She’s an amazingly talented performer and such a down to earth and lovely person to work with. When I chose “Black is The Colour” for the album I instantly thought of Sharon and hoped she would be interested in getting involved, thankfully she was and I think the track is a real gem on the album.

It’s almost been a decade years since you won Australian Idol. What do you want to accomplish musically in the next ten years?

I still want to keep challenging myself, trying different things and recording as much music as possible. I’m getting more and more involved in production and writing with other artists from my studio (www.studio4music.com.au) which is also a major priority. After that, I want to sing and play lots of music with my kids.

For more on Damien, please go to damienleith.com.au/

Originally published at the AU Review