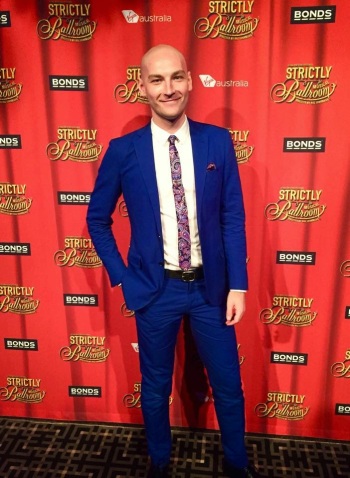 So, tell the people a little bit about yourself to start with.

I’m Adelaide born and bred. It was an amazing place to grow up. I was drawn to the Performing Arts from an early age. I went to an Arts-based high school and loved immersing myself in things like the music program, Rock Eisteddfod and Drama. I moved to Ballarat to study a Music Theatre degree at the University of Ballarat Arts Academy.
It was the perfect University for me – super creative and tucked away from the world, so we were forced to focus and work! I went hard my first year out and worked on nine shows, I think. Some were professional and others were for experience. I just wanted to keep driven and inspired. I played with different styles of theatre, dabbled with directing … I could go on forever but you probably don’t need my life story [laughs].

What was it about musical theatre that made you want to focus on that?
My mum took me to see lots of theatre when I was really young and I just fell in love. I was a bit of show off/loud personality as a child. Mum put me in dance classes and the love for performing grew. I auditioned for a children’s production of Peter Pan just hoping to be a lost boy or a pirate and was cast as Peter Pan. This threw me into the spotlight and there was no going back.

It sounds like you owe a lot to your Mum.
My mum is my number one fan, my inspiration, my manager, my therapist [and] my career guidance counselor. She is incredibly supportive and I wouldn’t be where I am without her.
Opening night of Strictly Ballroom was really emotional, especially the bows, knowing that Mum and Dad were in the crowd, and feeling a real sense of achievement in such a large scale production.

What do you love most about musical theatre? The stage, the lights, the Peter Pan tights …
That’s hard to put into words. What do I love? There are so many things; It differs from productions. Mainly, I love the performing aspect of it. Especially if it’s a show that I’m proud of. But with live theatre, every show is different, that’s the beauty of it and I love working with everyone to achieve the simple act of telling a story. I love that you get to stop being yourself for a couple of hours. And, in Strictly Ballroom, getting to run around, muck around [and] play as this character that you have created.

Would you also like to get into television, movies etc as well?
Yeah, I have trained in film and would love to get more into that. That’s the beauty of this industry, every job is completely different. I have trained extensively in Music Theatre but will focus more on “straight” acting, Film and Theatre, once Strictly Ballroom is finished. Depending on what the world throws at me, of course. It’s a wild and scary ride not knowing what lies ahead.

What do you like to do in your spare time?
I love watching movies, seeing theatre (whenever our schedule allows it), hanging out with mates (generally with lots of coffee or alcohol) and dancing. I spend a lot of time reading scripts and watching TV series. I do also love a cheeky road trip or two … again, with lots of coffee and/or alcohol.

Did you have any odd jobs before performing?
I worked at Boost Juice for six years on and off between studying, then Kikki. K and then as a cliche actor/cater waiter. But I hated this and hope that I never need to do that again.
I respect catering people so much now knowing what they have to go through. This was only for a couple of months though, so I shouldn’t complain.

Have you seen the movie Waiting? Is it at all like that?
No, I haven’t. That would give me nightmares. I’ll stick to The Wizard of Oz.

Ironically, The Wizard of Oz gave me nightmares so there you go …
Well that’s poetry for you. It’s my favourite and was the first big production I ever saw.

I read though, that you also played Banana B1 in the Giggles and Hoot live shows. Surely, you were kicked and poked. Wouldn’t that be high up there in terms of bad jobs?
No, I loved that gig! The Bananas in Pyjamas are treated like royalty. Seriously. Especially by the adult fans. We didn’t have much audience interaction, but when we did meet and greets, the kids would either love us or be super shy because we were 9 foot.
It also got me to tick off the bucket list performing at The Sydney Opera House, where I think everyone in the industry wants to perform at least once in their lives and it was an Australian tour with a great cast. I had a blast and visited some capital cities that I hadn’t been to.

Wow!
I love being tall, but it’s difficult to get parts in musicals; everyone is tiny in the industry. I was super lucky that Baz and Catherine love tall people, so we have a some very rare and super tall cast members.
I feel especially tall when Andy Cook (who plays Wayne) is off, because his understudies are much shorter. We are about the same height.

Baz says that a lot of talented people come from Ballarat. I wonder now, if he means people who study in Ballarat and are tall is the way to win Baz over.
I just like to think he’s talking about Me and Cristina [D’agostino, who plays Emily Waters] both from the same university. Ballarat represent! [laughs]

As you mentioned, you’re currently playing Clarry Welch in Strictly Ballroom. How would you describe your character?
Clarry is really fun. I tend to get cast as the fun characters because I’m a bit quirky. I’m so fine with this! Us quirky folk get to have more fun. I actually adore Clarry. He’s the underdog that a lot of audience members connect with. He represents all those people who don’t really fit in and don’t really care – or are maybe oblivious to.
I think he’s pretty cool and I’d want to be friends with him. Not many people can rock a tuxedo-onesie and a mullet. He has a surprising heavy back story (which I like to give all characters that I play). You’d never know as an audience member because it’s not important to the story that we’re telling. But it helps me shape my character and gives life to the very small information I’m given from the script.
I had to find a reason for him being so simple and clueless so I formed a back story about him being brought up by his Nanna. I won’t go into it but it gives detail that I think is important to every character that an actor plays. Baz applauded me on my detail and I’ll never forget it.

With Clarry being in the movie for a small amount of time. Did you look to the movie for any character inspiration, or did you have creative freedom to make the character more your own?
I watched the movie before the audition to get an idea of who I was auditioning for, but once we got into the rehearsal room we had creative freedom. I made an offer, Baz liked it. Boom! My Clarry was born! I kept reminding myself during the audition process, “If you stuff up or make a fool of yourself, just say it was your character.”

You also play a handful of other characters. Do most people pick up on this?
My friends do, because they know, but a lot of the audience members are completely oblivious. The wig department say that I’m a chameleon when it comes to my looks – I’ll take it as a compliment [laughs].
But Catherine has designed all these quirky different looks that I love slipping into. Audience members generally always have to ask me who I played. But because the make-up and hair design is so crazy for everyone, most cast members get asked this at stage door, even Fran (played by Phoebe Panaretos).
Mine is particularly difficult because I rock the shaved head outside of Strictly Ballroom.

They do say that hair and make up play a big part in getting into character.
Totally, I love playing dress-ups. Especially the wigs, I love my wigs – especially the blonde one!

You wear three different wigs during the show; have you named them?
Just their character names. Even the small characters with no lines get names. The blonde is Virgil Spice. My Spanish guy is called Joaquin. And my flashback guy is called Harvey Welch. We joke and say that all our flash back characters are the parents of our characters.

How did the opportunity to be in Strictly Ballroom come about?
My Agent got me an audition. I didn’t think I was right for the show because I’m not a ballroom dancer. I was on tour and in another state during the auditions and my Agent highly encouraged me to fly back. Thank God I did! I almost didn’t audition. Crazy, huh? You gotta be in it to win it.

What was the audition process like?
The audition process was long – a few months with very long breaks in between. But my final audition was a 20 minute one-on-one with Baz. It was magical. I’ll never forget those 20 minutes – there was a room full of creative onlookers but Baz made me feel so comfortable and inspired. It was very special.

Was there more pressure to impress with Baz himself directing the musical?
I love Baz! There was initial pressure, because I respect the man so much, but we all got used to it and he became a colleague. But yes, that audition, I was incredibly nervous but Baz made me feel so comfortable. He’s a wonderful man. I hope to work with him again.

What is your personal highlight of being part of the Strictly Ballroom?
The Opening Nights are incredible! – the man knows how to throw a good party! Strictly Ballroom has given me an amazing foot in the door with the industry and I hope to be in it for a while longer. I’m very thankful to Baz for giving me this. I’ve met some incredible people who I have admired in the past and can now call them friends. That’s pretty special.

Do you have a favourite song/dance from the show?
I love the opening! It’s so much fun being the Kendall’s cheer squad. We really get to establish our characters here and we interact with all the dancers. They throw us cheeky winks and sometimes yell back. It’s really fun and different every night. It’s also amazing feeling the energy of the audience. Explosive!

You mentioned that you’re not a ballroom dancer. What’s been the hardest dance to learn?
They put us in Flamenco lessons before the show started. That was super challenging. But I didn’t need to go because I didn’t end up dancing in the show.
It was really cool to be exposed to such a different style of dance, though it’s very difficult. Fernando [Mira, who plays Rico] is insanely talented.

He is and it’s such an amazing number.
One of the show’s best! I think it’s beautiful and full of spirit.

Strictly Ballroom is now showing at Her Majestys Theatre. Tickets on sale at Ticketek.
Follow Lachlan on Twitter .