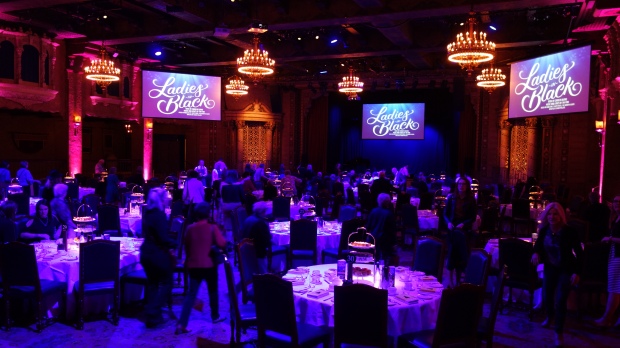 Media and select members of the public were invited to a special morning tea to celebrate the return of the Australian musical, Ladies in Black (based on the 1993 novel, The Women in Black by Madeleine St John).

Here is part one of the group interviews with lead actress, Sarah Morrison.
What: Ladies in Black media call
Where: Regent Theatre, Melbourne
When: 29th November, 2016

Coming to Sydney, Brisbane, Melbourne and Canberra in 2017! 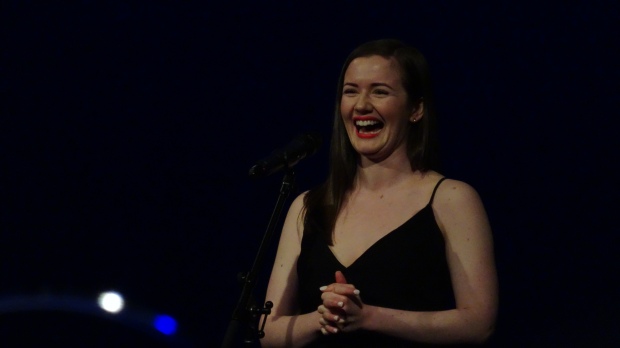 SARAH Morrison – Lisa
Sarah– on originating the role of Lisa
“Originating a role is incredibly rare thing for any actor in a lifetime, so that’s really remarkable, but also to play the role of a young girl. In Star Wars, there’s this character of Rey. I remember seeing the movie and going, ‘wow, here’s an central female character who is fully clothed – she doesn’t have a bunch of make-up on, she can fix a spaceship and no-one asks why [and] there’s not a love story to justify why she’s in this movie’ and I was thinking about Lisa, and thought, ‘wow, I’m playing an central female character who [just] wants to go to university, not to date the boy next door, which is kind of unheard of.

It’s really important that we are bringing these characters to life. I did a David Williams play recently, and I must have been talking about this Star Wars thing too much, because for opening night he gave me this little Rey doll. I now keep it with me because it just reminded me that girls can be heroes too. I don’t mean to sound overly-feminist, because there are many many other themes in this show, but for me and for young girls, coming to see Ladies in Black, it’s so important to have girls who have dreams – because I suppose a big idea about this show is courage. Courage, it’s different for everyone. [It’s] subjective, so what takes someone else you know would bat an eyelash at; I might be shaking in my boots – everyone can relate to that.”

Sarah– on doing the show a second time
“I reckon it’ll have a different feel. It’ll be great. Personally, because last time it was my first thing and now I know I can relax and enjoy. I suppose coming back, having the privilege to originate a role probably didn’t hit me like it did back then. I was just swept up in the magic of being in my first lead role. I didn’t really sit back and go, ‘wow, what a privilege and particularly playing a central female character – just having a story that’ll remind girls and boys that you can follow your dreams, so just to keep going. This simple story that managers to make extraordinary out of the ordinary, which is why it’s so relatable – you’ve got a book that was written in the early 90s, about the 50s, being performed in 2016/2017, yet there’s a seamless continuity about those decades.”

Sarah– on her favourite song she gets to sing
“Probably The Fountain, which is the first insight you see into Lisa and her passion for poetry – she goes off into her own little world. It’s very eerie, beautiful; but there’s a lot of heart in that particular song. You really get to see what she’s about. She’s by herself; she’s not putting on her pretense of pleasing her Mum and Dad. You see what she really wants.”

Sarah– on funny moments during the show
“It’s funny because I don’t really get to be funny. There’s a point every night I’m just about to do the Fountain song, and the Bastard song is playing. I’m doing my quick change and  I always have an ear out – you can hear it, the laughter. Sometimes there’s people calling out from the audience, which is kind of encouraged, because people get so invested in these stories. There’s a beautiful scene between Patty and Frank at the end – their reconciliation –  and the biggest laugh in that song is the word ‘wogga’ because no one expects it – [there is] all these colloquial terms that it is so Australian.”

Sarah– on if there’s going to be a cast recording
“I would love to do a cast recording, because I’d love to have these to hold on to forever. I don’t know anything about it, but the more demand, the more people asking, hopefully maybe that’ll give impetuous get a cast recording done. It would be a shame not to, I think.”

Sarah– on why people should see the show and what makes it relatable
“We are very lucky that we’re getting these big blockbuster musicals coming over and there’s a format and they cast according to that format – it’s how you look, your height and obviously the talent, and you can fulfill those requirements. But to have a home-grown, and I know that word is getting thrown around a lot, but it truly is an Australian story.

Everyone comes to the theatre every now and again to escape, and the fact that there is so many happy endings is really nice, because people walk out of the theatre laughing and smiling. I’ve had so many gorgeous people come up to me after the show and say, ‘Oh my gosh, my dad wouldn’t let me go to university. He made me go to secretarial college.'”

Sarah– on Lisa’s relationship with Magda
“We’ve got Natalie Gamsu coming in to play Magda for the tour. I got a lot of stage time with Magda, being the kind of fairy godmother figure and it’s really beautiful relationship to be able to grow every night on stage. That kind of mother duck thing, taking her under her wing, and showing her this entire new world; it’s beautiful.”

Sarah– on if she was aware how hard it was for young girls to go to University in the 1950s
“No, [I wasn’t aware] because a year prior, I had a bit of downtime, popped online and enrolled in a master of commerce – and I did that from my bed. So it took a little bit of sitting down and thinking about that – here’s this girl who, let’s have a look at it, in the 50s, it’s remarkable that she’s even finished high school. Women were typically a bit more passive and concerned about domesticity and the house.”

Sarah– on if she’s read the book the musical is based on
“Yes, I have read the Women in Black. I’m reading it again just to families myself with bits and pieces. There’s so much on stage that has literally come off the page, and I would absolutely encourage people to read the book, because it just gives it a whole nother level of what’s going on, the subtleties and appreciating what these three creatives – Simon [Phillips, director], Tim [Finn, music and lyrics] and Carolyn [Burns, screenwriter], have done recreating this work. It’s incredible.

One of the actors, who plays my Dad in the show, Greg Stone, was poking fun at me because in the book Lisa reads Anna Karenina, and last time I didn’t get around to doing it because I was just trying to absorb the show. I said, ‘well, I’ve seen the movie, Greg’ and he’s like, ‘it’s not the same’. So this time I’m getting through this book – but on stage we use an abridged version; so when I went and got this dictionary-sized book from the bookshop, I thought, ‘oh my goodness’ but I’m really really liking it.”

Sarah– on working with director, Simon Phillips
“Incredible. I’d actually worked with him ten years earlier. I was in La Boheme, and the children run on in the second act for two minutes, but I never forgot Simon’s two different colour sock thing that he does; where he wears two different coloured socks. It was the first day of rehearsals last year and I see these two-coloured socks and I go, ‘Oh my gosh, I’ve worked with you when I was 15.” It was actually quite amazing to, that was my first gig as a teenager, and then now working on my debut so to speak with him again, you couldn’t be in safer hands. You could spend the day watching him. He’ll stop, go in and you’ll see his brain ticking over; the next thing he’ll open his mouth and he’ll change several different things but it will just work. No one does what he does.”