It would be tough to envisage a more spectacular way to spend two hours in Melbourne this summer, than to spend it at the Regent Theatre, which has become the setting for big top thrills as it plays host to Circus 1903. Playing until January 12, this incredible collection of death-defying acts, slapstick comedy and astounding skill is a glowing tribute to the golden age of circuses and guaranteed to cast its magic spell over all those lucky enough to catch it.

Circus 1903 works from a premise that the audience has stepped back in time 113 years to witness a circus as it might have been staged at the dawn of the 20th century. We’re first introduced to the garrulous ringmaster Willy Whipsnade (wonderfully played by real-life magician David Williamson), who endears himself instantly to the audience by showering them with popcorn. Acting as our guide and MC for the evening, Whipsnade – through his evocative running commentary – transports us instantly to another time and place and we’re under his spell for the entire duration.

The first act is the “rehearsals” and a peek behind the curtain of the circus, with the second act being the circus proper, but the skill and artistry of display is incredible from word go. After Whipsnade shares some on-stage banter with a young audience member he has invited up on stage to begin proceedings, we’re treated a high-energy game of acrobatics from the extraordinary Flying Finns, who reach incredible heights using only a seesaw. From here we witness one unbelievable act after another, from the amazing contortionist known as The Elastic Dislocationist to a literal balancing act from the The Sensational Sozonov. Arguably the show’s most nerve-wracking moment takes place in Act I, in which The Perilous Perigo flings flaming knives at his incredibly courageous assistant. You’ll want to look away but will be mesmerised at the same time by this terrifying bit of derring-do. 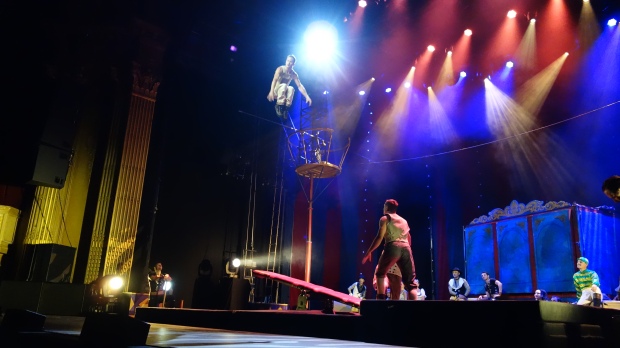 The Flying Finns in action

For me though, the show’s highlight came further along in Act I as aerialist Lucky Moon performs some awe-inspiring tricks on a golden hoop suspended high above the stage. The combination of Moon’s graceful movement, the evocative lighting and Evan Jolley’s spectacular music score, makes this arguably the show’s high point, but there are so many highlights it is impossible to single out just one.

Not to be outdone, we next meet the show’s true scene-stealers, a pair of puppet pachyderms, the majestic Queenie and baby elephant Peanut, who if you squint you might mistake for real beasts, given how realistic their movement is. Created by the same team who made the amazing horse puppet used in the stage version of War Horse, the puppeteers who bring these two creatures to life deserve high praise. They are truly a sight to behold. 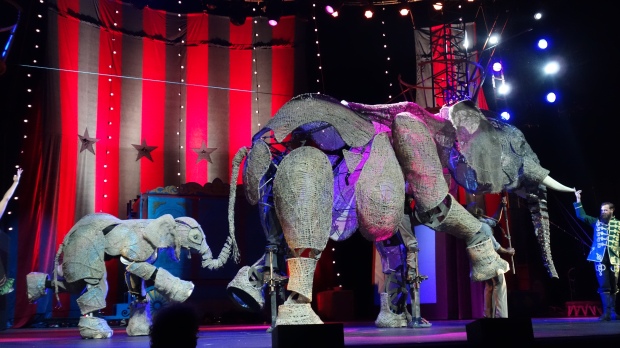 Act II sees a more elaborate circus set unfold before our eyes, with a wonderful re-creation of a big top on the stage. The second half gets off to a sprightly start with the stunning trapeze act of Les Incredibles, followed by one of the most astounding juggling displays I’ve ever witnessed, courtesy of The Great Gaston. Next is the foot juggling prowess of the pair known as Fratelli Rossi, who accomplish acrobatic feats you wouldn’t think a human being would be able to accomplish, but somehow they do here.

Next we’re treated to a magic act from our ringmaster, who recruits the services of four children from the audience to help him pull off an overly elaborate card trick with the help of Whipsnade’s pet raccoon. Thanks to Williamson’s effortless stage presence and expert comedic timing, this segment is utterly charming and the final payoff, with the re-emergence of Peanut on stage, is priceless. 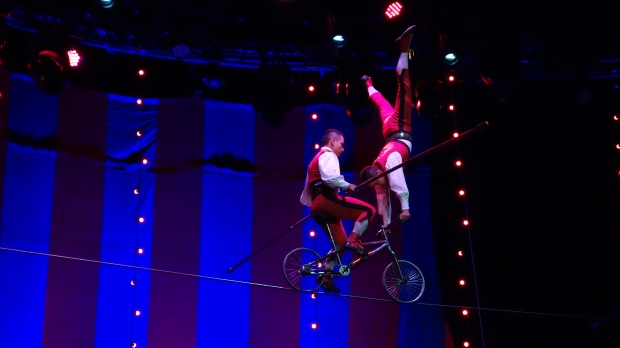 The final act features the high-wire heroics of Los Lopez, a trio who not only traverse the high-wire themselves across the stage, but ride a bicycle and carry each other on planks over the narrow wire. The perfect way to end the show, this segment continues to escalate the difficulty and danger of the act, and as the tightrope act is one of the most iconic of all circus acts, was the perfect way to conclude a wondrous two hours.

An utter delight from start to finish, Circus 1903 is a momentous achievement for all involved. A cornucopia of big-top bliss, I don’t know if the sheer visceral delight this show leaves you with can be conveyed with mere words. You’ll simply have to step back in time and experience it for yourself.

Playing at the Regent Theatre, Melbourne until January 12.

For more information and tickets, go to: www.circus1903.com