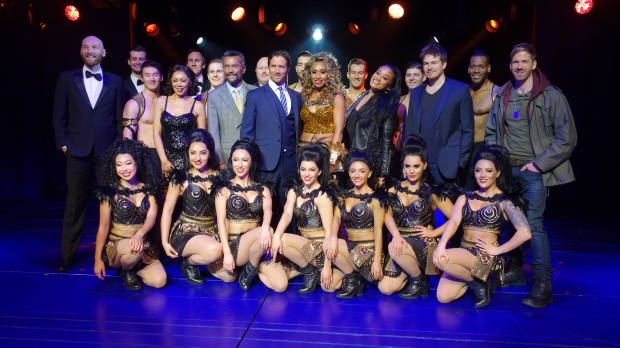 Here is part one of the group interviews with performer Prinnie Stevens.

What: The Bodyguard media call
Where: Regent Theatre, Melbourne
When: 24th August, 2017

Playing at the Regent Theatre in Melbourne from August 24.
For more information and tickets, go to: thebodyguardmusical.com.au

On playing Nicki:
“This role in particular, and the reason I took it on, was because it’s a real acting role for me and I haven’t been able to delve into that as much as I do in this show. I’m really proud of that – it’s a huge acting role for me! The sister in the movie did not get as much airtime, I guess, and they’ve really developed that character in the musical. I’ve really tried to understand her. It’s not a one-dimensional character.”

About performing in The Bodyguard:
“It’s amazing being able to sing Whitney Houston every night and relive not only the movie, but her amazing songs with every single audience that comes in! We always end on a high with the party songs!

Regent Theatre is just stunning! This is such a huge theatre! It’s very different to every other city we’ve been to – they’ve been quite intimate houses so we’re projecting more. We’ve been doing the show for a few months now, so it’s been heightening everything we’ve been doing. We’re unfortunately coming to the end of the run as well, so enjoying every moment we can with each other in this great show.”

About the audition process:
“The biggest thing for me was Whitney and drawing on memories I had of the legacy she left us. I’m a huge fan of The Bodyguard the movie. I think that’s one thing I love about the show, you see the movie you know and love, but there are so many additives that make you walk away loving it even more … if that’s possible (laughs)”

About changes in the show:
“Things change all the time – that’s the best thing about live musical theatre! You find new things with the actors, or Paulini and I as singers. We have found so many nuances within the show that Melbourne now gets the perfected version. We’re going to cherish every moment here [in] a beautiful theatre and our last shows together.”

About changing the songs in The Bodyguard:
“It is a true homage to her musically – you can come expecting all the songs from The Bodyguard and a bit more. They are so iconic you have to respect the song first and foremost and what Whitney did, and to veer off too far from what she did would be a disservice, so we do stay true to what she did and don’t try make it too much of our own version. Everybody knows and loves those songs the way they are, [so] who are we to come and change what Whitney did?”

About the possibilities of stalkers in regards to the story of The Bodyguard:
“Anyone with exposure like that, you do put yourself out there (and with social media the way it is), it’s very true to our lives and what we do – so it is a scary part of our industry. But like every industry, there’s always one side of it you’ve got to be ware of.”

On her favourite Whitney Houston song:
“I get to sing it every night and it’s Saving All My Love.”

On the audience getting up to dance at the end of the show:
“Because it is such a storytelling musical, once they get their chance to show their appreciation, everybody’s up! It’s not an easy feat to sing Whitney every night and Paulini smashes it every night. It’s the kind of show that’s got a huge heart and you can feel that in the audience. You can feel the back and forth between the audience and the stage and then we go into the finale where it’s just one big party (laughs).”