Here is part two of the group interviews with performer Kip Gamblin.

What: The Bodyguard media call
Where: Regent Theatre, Melbourne
When: 24th August, 2017

Playing at the Regent Theatre in Melbourne from August 24.
For more information and tickets, go to: thebodyguardmusical.com.au 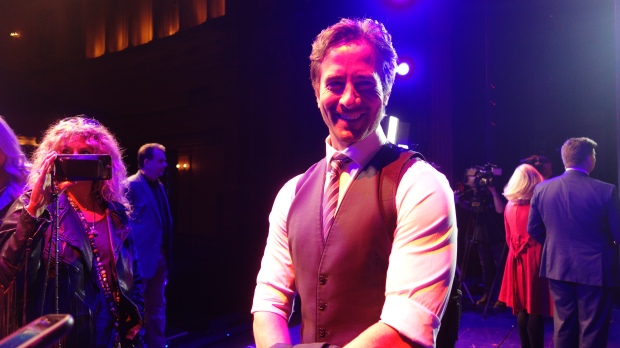 On being a part of the show:
“I’m so thrilled and honoured to have been able to perform this show with my fellow cast members. I’m so proud of what we’ve achieved across the country thus far. Seeing people on their feet every single night in the audience is amazing and I’m so proud of all the hard work we’ve put in. I’ve learnt so much from every single person in this show. Being in this beautiful, grand old dame of a theatre is quite awe-inspiring. I’m really looking forward to sharing the show with our Melbourne audiences.”

On his karaoke singing scene in The Bodyguard – the Musical:
“It’s great fun. Now after doing about 120 shows it feels like second nature, but in the rehearsal period … there are amazing people in this show that have been in musicals many years and to sing in front of WAAPA-trained people with beautiful baritone voices, it was confronting. But like most actors, I love throwing myself in the deep end and I love a challenge, so it’s been really fun doing it every night. A lot of people ask me after the show: is that really your voice? Is that how you sing? Without giving away too much, it’s a really light-hearted moment in the show and beautiful moment between Rachel and Frank. It’s good fun.”

On his favourite song in the musical:
“There’s so many! Any given night when I leave, I’m always humming or singing one song from the show. Invariably Run To You or I Will Always Love You, whether it’s my version or her version I don’t know … but that’s what’s fantastic – with some of the musicals recently, the soundtracks aren’t songs that you come out singing. They’re not hooky songs, but this show is. They’re already in people’s DNA so people come out really singing the songs.”

On being a fan of Whitney Houston and The Bodyguard:
“I did have a young man crush on Whitney with the blonde perm in the video of I Want To Dance With Somebody and also the movie. I was taking a lot of young ladies to see the movie. It was a bit schmaltzy but there was a good heart to it and the soundtrack was kick arse! I probably have had a secret crush on Whitney all my life. You know one of those ones you can never shake? Because I’ve been a dancer that I Wanna Dance With Somebody video clip had some amazing male dancers in it and she looked fantastic in that tight mini – so definitely a Whitney fan!”

On the audition process:
“For the audition I just wanted to go in as a blank canvas. I didn’t want to watch the film again and then go in with a preconception they were looking for Kevin Costner’s Frank Farmer. Once I got the role and we were rehearsing I did go back and watch it. I felt like it wasn’t going to influence my performance because this is a really different fish to the movie in a sense. Of course we reflect the story but it’s a stage theatre show so there are some different twists.”

On being on stage compared to television:
“Before I was on Home and Away and Neighbours, I was a classical ballet dancer for many years. I learnt the discipline of classical ballet, so being on a stage for me, I enjoy. I’m really enjoying being back in front of a live audience and having that rapport with that immediate response with people, but I forgot the challenges that come with that.”