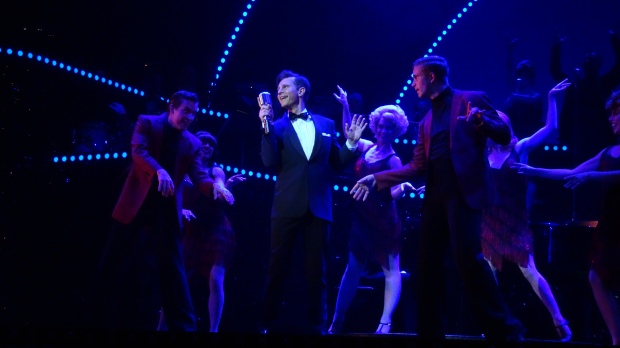 Here is part two of the group interviews from the Dream Lover media call with lead actor David Campbell.

For tickets and more information, please go to: https://dreamlover.com.au

David – on the first time performing the show to Melbourne audiences

“The first time coming out here, the whole audience was reacting so beautifully to the show, responding to the story and the music, they were clapping and screaming; and then when we came out and they all just stood up, it was kind of overwhelming. I really felt the family being here and really felt for Dodd and Audrey [Bobby’s son and ex-wife] and for what it means for them and that Bobby and Sandra’s story is resonating so much.

There’s a feeling here that’s resonating here deeper in Melbourne for some reason. I noticed that when we brought Dobb out here that there’s a lot of deeper movie nerds and historic people. When we went and did Dennis at 3AW [radio station], they’re all calling up wanting to know, “how can I get a hold of Sandra’s movie?” and “there’s a Gidget [movie Sandra starred in] I can’t get a hold of” and Dobb was like, “Let me see what I can do!” so there’s a real deeper understanding of the history of what they were here in Melbourne, so I think it’s resonating with the audiences.”

David – on performing with a different cast in Melbourne

“The majority of our cast is the same but we’ve added Marina Prior, Rodney Dobson and a couple of younger team members as well in the company. It’s been fantastic! Marina brings such a warmth to the role. Rodney brings a real every-man quality to Charlie.  Rodney and I go way back to Les Mis in 1997. Marina and I did Guys and Dolls [when] she was 6 months pregnant in 2000. So we’ve all circled and worked together for so long so they’re just all part of the big family now.”

David – on how much research he did for the role

“In a way, I’ve been researching Bobby since 1998, when I first picked up the book in New York. I started singing Bobby’s songs in America, meeting people who knew Bobby and doing medley’s of Bobby’s at my shows in New York. I was such a fan of Dodd’s story then because it resonated so much with me and my life and the strange historical accuracies that he and I have with our families [that] was so important to me as a young performer.

And the fact that Bobby did so many different styles, I’ve been studying, ripping off arrangements, living Bobby Darin in many years over my whole career as a singer. To finally come to this, it was great to deep dive again and find things I didn’t know about him and find out interesting stories thanks to John Michael [Howson OAM – Original Concept & Stage Play], Frank [Howson – Original Concept & Stage Play & Stage Adaptation] and Simon [Phillips – Director and Stage Adaptation] as well, things that were different and new. And getting to know Dodd and the family, gave me a different insight all together. I really feel deeply immersed and deeply grateful to be in this character.”

David – on the cast recording of Dream Lover

“It’s not legitimately what you’d call a cast recording because we were still working on the show when we did it so I guess it’s more of a concept album with some of the cast in it – including myself. I’d love to come back and do a proper cast recording with all the little bits and pieces that we have in it. It would probably help to sell it to an overseas market, as well, but it is out there with all your favourite songs.”

“For a younger audience you’re getting a great story and a great love story of somebody you may have heard of. Like most young people, even to Dodd’s grin sometimes, know Sandra Dee through Grease – “Look at me, I’m Sandra Dee” is a famous song – we know of this icon of the time. I think if you love pop music, if you love things like One Direction or Britney, or if you love seeing how these pop stars rise and fall, and rise and fall again, well that story happened way back in the 50s and 60s too, so historically you can see how pop music has always been the same in different genres. It’s a great night out but you just get wrapped up in the music, the story and the 18-piece big band. You’re not going to see that at a Sia show – in fact, you won’t even see Sia (laughs).”