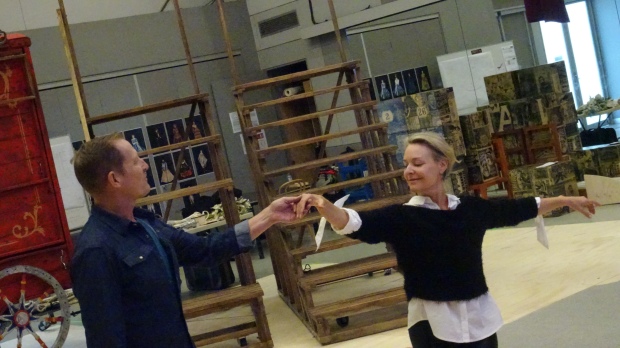 Here is part of the group interviews from Barnum – The Circus Musical media call with Rachael Beck (Charity Barnum) and Kirby Burgess (Ringmaster).

What: Barnum – The Circus Musical
Where: Comedy Theatre, Melbourne

Sydney-based, Rachael on coming back to Melbourne for Barnum
“No [it didn’t take much convincing to get me to Melbourne]. I would do anything with Todd. We just love each other so much. I was straight in; an easy decision. We’ve done years and years of work together. We did full Australian tours of Singin’ in the Rain, Cabaret, symphony concerts together, and lots of other smaller shows as well. We know each other really well, and that’s why [we were] cast. If we don’t believe this Charity and Barnum story, everything else is just forth and bubble and nothing else means anything. But that’s life, isn’t it? The only thing that means anything is love. I’ve watched shows before – won’t mention their names – you think, there’s no chemical bond. Whether it comes from either of the actors, or they haven’t created it or they can’t. I’ve been very lucky to have some brilliant leading men.”

Rachael on her character not doing any circus tricks in the show
“The funny thing is, I know how to do the silks, ring and trapeze, I’ve done it for years … it’s just not in the character. That’s alright. I’ll do it in my own time. Now that I’ve met all these circus dudes, maybe next time I’ll do a show with lots of circus tricks.”

Rachael on the musical being different to The Greatest Showman movie
“[The musical is] about PT. Barnum; the real story. He’s nothing like Hugh Jackman at all. He was a shyster. Michelle Williams’ character Charity was much softer. The Charity of the real times was harder and I suppose a product of the times as well. It was hard times. It’s got more of a Tim Burton-esque smell of the sawdust, rustic-type feel to this show, like you’re in a real circus tent.”

Rachael on the show being time period correct
“1860. I’ve got the big crinoline dresses, . There’s one scene where I’m taking down the washing in my good crinoline dress. I said, “she wouldn’t be taking down the washing in her dress.” They did. From the minute they got out of bed, they pulled on those crinoline corsets, wound their feet up in boots and they did everything. The washing, with the scrubbing down the boards and things in those huge dresses. The costumes are gorgeous though. The design team haven’t spared an inch or penny.”

Kirby on playing the Ringmaster
“I feel very lucky; this role is usually played by a man. I’m clocking up about nine other men in the show. I think it’s having a real element to have a woman playing them. The ringmaster is that element in the show that keeps bringing Barnum back to the circus and enticing him back to show business. They’re a little bit dark, but it depends on your opinion of it really. I feel very proud to play them.”

Kirby on the show being family-friendly
“It’s a show for all ages. It’s a family friendly show and a good date night. For the kids, particularly over our previews, I don’t think the audiences have realised just how spectacular this show actually is. We are bringing this new element to the theatre. The circus, it’s not just a couple of kicks and cartwheels. We’ve got people flying through the air, people flying from the air – so that visual spectacular will entice any child and inner child that adults are, and the beautiful story. Theatre lovers will fall in love with Todd McKenney as Barnum, Rachael Beck as Charity, Jenny Lind, and hopefully myself. Fingers crossed. I might be a little bit of a the villain sometimes.”

Kirby on people expecting a copy of The Greatest Showman
“The Greatest Showman has really put Barnum on the map. This is a deeper element to it. The fact, too, it’s live – you get to see us up there doing it in front of your eyes. You don’t get to press rewind, and I think that element alone in theatre, is what really opens your heart up, makes you excited about the story and everyone loves the circus. We’re proud that the Greatest Showman came before this because it’s helped people be interested in this story. We’re telling it a little deeper.”