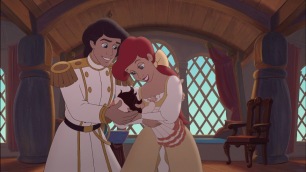 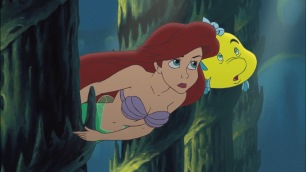 Sure, it has the odd catchy song (“Titanic Tip and Daring Dash, adventurers slash explorers” will get stuck in your head on repeat for days) and most of the original character voices but it’s no timeless classic. I loved The Little Mermaid so why don’t I love the sequel just as much? Maybe it’s the little things that bugged me so…

1. Little kids/young teens can be inspiring with their free spirit, creativity and single-minded focus and drive but boy oh boy Melody just annoyed me! For me, this annoyance can be pin-pointed to one conversation between Ariel and Melody: Ariel: “It’s dangerous in the sea!” Melody: “How would you know? You’ve never even been in it!” Wow. How presumptuous. It never occurs to her that Ariel had a life before Melody was born. How would she know what Ariel has never done?

2. How does Melody not know that Sebastian and Scuttle are friends with Ariel? Surely the kingdom talks about the past. Kids hear things. Plus I can’t imagine Scuttle not blabbing.

3. Eric is voiced by someone else. I was not a big Eric fan to begin with but now he just seems more chatty and cheesy (aka annoying?). Though to be fair he does seem like a loving father and husband who means well (gotta give the guy some credit).

4. Ariel doesn’t step in to save Sebastian at Melody’s birthday party nor does she acknowledge that she knows him or can understand him. Has she chosen motherhood over friendship or is she just really oblivious and doesn’t see him? It makes me feel sorry for Sebastian either way.

5. Twelve years or so since Ariel was a mermaid and she has the same shell bikini? Still purple? Still fits after having a child? (It’s this part I have to keep reminding myself that it’s magic, or more specifically  King Triton’s magic. How would he know to update her fashion?)

6. Why oh why is the evil short lived and glossed over? In the first movie Ursula was taken out rather swiftly following the dramatic conflict and in this movie her sister Morgana was taken out even more quickly. (Awesome side note, Morgana is voiced by Pat Carroll who also voiced Ursula! Sorry, I just found that pretty cool. She does a good job or making the characters differ with tone etc.) Where is the struggle? Where is the inventive thinking by the heroes? I just feel they kept this too simple compared to other Disney movies.

As a stand alone Disney feature The Little Mermaid II Return To The Sea is a nice family movie with a few interesting new characters, some catchy songs and interesting plot moments… but as a sequel it falls a little short in strength.