Last Thursday week, I had the absolute pleasure of attending the Opening Gala of the Melbourne International Film Festival (aka MIFF). Included was the red carpet, screening of Paul Cox’s film Force of Destiny and of course, the all important after party event. Celebrity guests included Natalie Bassingthwaite, Stephen Curry, Pia Miranda, Geoffrey Rush, Josh Thomas, and the cast of Force of Destiny, including David Wenham, Shahana Goswami and Hannah Fredericksen, just to name a few.

I’d love to fill this post with photos from the red carpet but I unfortunately didn’t attend. I rushed straight from work to grab some dinner before arriving when the red carpet started to dwindle. I’m so bummed too as I hear that Richard Wilkins was there – and I’m a big fan of Richard’s.

Before the movie began, the audience bore witness to a plethora of speeches from the people involved with MIFF, the sponsors of Metro trains and Paul Cox himself. Cox was amusing, warm and inspirational. As a receiver of an organ donation himself, his speech really touched me.

Any who, onto the movie …

The movie premise is very sweet. The movie starts Robert, an artist, played by David Wenham whose life is rocked (and of his daughter’s and ex-wife) when he learns he has cancer and needs a transplant in order to live. During this ordeal, he falls in love with Indian Aquarium-worker (surely, there’s another name for that?!) Maya, played by Shahana Goswami.

I’d like to say I was moved by the movie, but I was more touched by Paul Cox, whose movie inspired this movie. Like many of the audience, I was left at times feeling bored and restless. Many of the audience snuck out midway – I, at first, thought it was for a bathroom break, but when they never returned, I assumed they left to hit the bar instead.

I’d guess you could compare this movie to real life – and maybe that’s the problem. Usually life is slow-moving and tedious. But being a movie, day to day events are often cut and for good reason, because life, is often boring. Perhaps this is part of the movie’s failure. But saying that, I cannot think of another way that it could have been done.

Perhaps the flaw also lays blame in the actors and characters. The chemistry between Robert and Maya is off. While Maya is fun, flirty and giggly, usually the charismatic David Wenham is left monotonic and unlikable, and the audience is left wondering if they really even care for the characters and ultimately, the antagonist, Robert’s recovery. Even an brilliant actor like David Wenham could not save this snorefest for the senses.

I can only imagine that being diagnosed would make you want to be alone, quiet and withdrawn. This is displayed in the movie, but even without the outside appearance of any emotional display – the voice over work done by David is also done in a monotonic fashion. So say, even when he’s saying how much he wants to sleep with Maya (although I did note a bit of tongue and cheek – no pun intended) it stands dry.

The movie is also quite gruesome. I’m unsure why we needed to see close ups of a butcher chopping up meat or the play-by-play of David’s operation from the operating room. As a sqweemer, I had to turn my head numerous times. It did provide a shock factor and would have woken the audience up from a light slumber.
Saying all this though, it wasn’t the worst movie I have seen but nor was it the best either. This movie does have potential to be liked by many. I can only say that it isn’t my kind of movie – and that’s okay too – if you like dramas then this movie is for you. If you like something a little more punchy, then you probably won’t enjoy it either. So use your own judgement, is the best I can say. 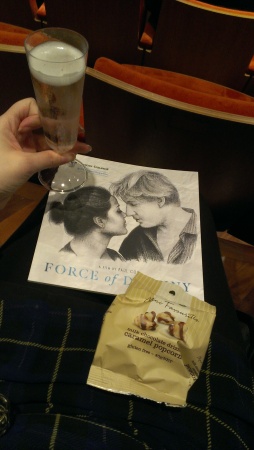 After the movie, we were treated to free Cob’s chocolate-popcorn, souvenir program, live music and photo booth, plus free drinks and canapes.
As always, what happens at an after-party, stays at an after-party. But it was a pretty amazing night!
Thank you to MIFF, Metro, the volunteers, the Arts Centre and everyone involved in making the night oh so special.