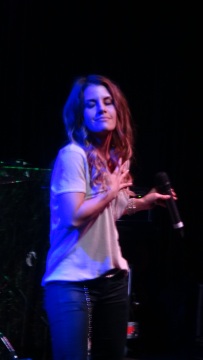 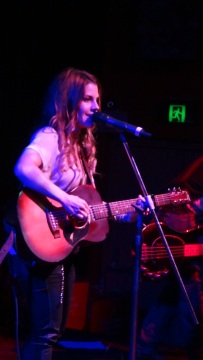 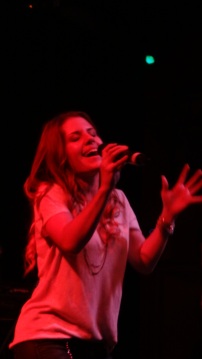 The intimate surrounds of Revolver Upstairs played host to the final leg of country star Jasmine Rae’s Heartbeat album launch tour, which coincided with the release of her latest album of the same name.

Revolver is a famous Melbourne venue, and located in Melbourne’s trendy Chapel Street, an area known more for club music than country, but it proved to be a fantastic venue to play host to Melbournian Rae’s final Heartbeat gig. Support acts Alanna Deutrom and Matt Cornell got things off to a rocking start. Deutrom’s soulful acoustic sound was a true marvel and signaled the arrival of another talented local singer-songwriter, while Matt Cornell and band literally shook the roof of Revolver as their wonderful brand of country rock roared with energy. It was a welcome surprise that Cornell and his band performed double duty on the night and stuck around to be Rae’s band for the night, providing perfect accompaniment to her vocals.

After the two superb supports, Rae finally hit the stage and kept the upbeat vibe going as she instantly wowed the crowd with her energy and stage presence, launching into her first number and not letting her the energy subside until her final encore was concluded.

Despite her diminutive size, Rae is a towering stage presence and unlike a lot of performers, and reputation as an incredible live performer was proven again and again as she performed a mix of old hits and new songs from Heartbeat. Performing around a dozen songs in total, Rae showcased a diverse set of sounds during her set, from mainstream pop to more rocking numbers to songs with a distinctive country twang. It’s during these numbers, such as the insanely catchy Eggs in a Basket (a song I still have stuck in my head more than two weeks later), in which she shone brightest, and her more traditionally country-sounding songs definitely made the greatest impression on the night. Why You’d Tie The Knot, in which Rae pulled out the harmonica to provide a memorable intro to her song about a loveless marriage, was another highlight.

Rae’s interaction with the crowd and genuine love for her fans was evident during every second of her performance, and would surely endear her to those in the crowd who may not have been familiar with her work before this concert. Not being exposed to much country music in my lifetime, I was surprised at how much I warmed to her songs that possessed a more typical country sound, rather than her more mainstream rock numbers, but the combined effect was that of a singer you feel could master any music genre and leap from one type of music to another with consummate ease.

There was times where I felt like I was in a rowdy Nashville bar than on Melbourne’s Chapel Street thanks to the wonderfully vocal crowd and Rae’s country numbers. Rae’s latest single, Heartbeat, made an appearance during the encore and with promotion and word of mouth, could definitely prove to be a crossover hit for the singer, with its soulful verses and catchy chorus. The overall impression of the performance was of a supremely confident, supremely talented singer who, while she has already achieved so much in Australia and overseas, is just getting started on her music career and will be a major player in the music scene for decades to come.

Song List: (may have been more …)
– Top of the World
– My Daddy’s Name
– Country Singer
– Hunky Country Boys
– I Faked It
– Heartbeat
– Everybody Wants To Take My Money
– Eggs in a Basket
– Lose You All Over Again
– Why’d You Tie The Knot
– First Song