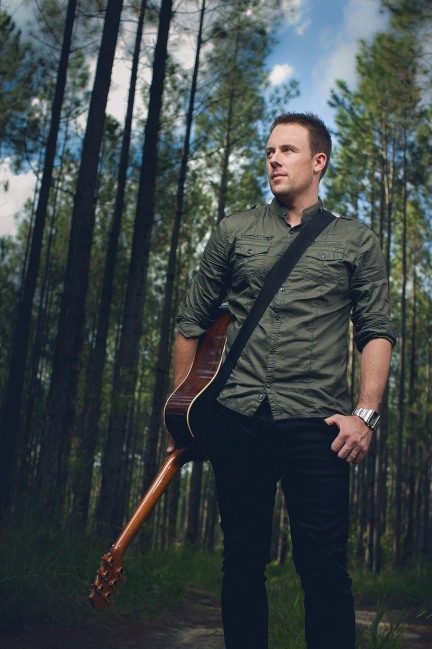 Following the success of his last single, Just Like Magic off his 2016 release, Live As One; teetering on the edge of commercial pop and rock, with a blend of American, modern-country sound, Casey Barnes has once again teamed up with Michael Paynter and Michael Delorenzis from MSquared Productions with the equally catchy, follow-up single, The Way We Ride.

Your latest single, The Way We Ride was written and recorded with Michael Paynter and Michael Delorenza from MSquared Productions who you worked with on your previous single, Just Like Magic. Tell us about the new single.

The current album feels like it’s only been out for a short amount of time. Because that album included new songs [and] some tracks off my previous EP, I thought it was the right time to start moving forward and concentrating on brand new stuff. Because things worked so well with Michael Paynter and Michael Delorenzis from MSquared Productions, we decided to keep going in the same direction.

We had strict brief when we got together and we wanted to write and record two brand new tracks – one of them, you haven’t heard, which will probably be the next single. These latest two tracks, we’re really happy with them. [For] ‘The Way We Ride’, we wanted a toe-topping, up tempo, high energy, rocking track that was gonna be great for radio, but was also great for our live performances [and] going to get people engaged in live shows.

Before we started recording those two tracks, we put together a production reference play list of different artists we were really liking. I love the American, modern country sound at the moment, a lot like Keith Urban’s new album and a few other different bands with that modern country sound that crosses over a little bit into commercial as well. That’s what we wanted to do. When we get together we like to have an idea of what we’re going to do, but we generally work best when the three of us write everything from scratch. The boys have definitely got their finger on the pulse. They know what to do. I’d been working on some song ideas and I had a couple of little melody and riff ideas. Straight away Michael Paynter was like, “this is great – let’s expand on that!”

What is The Way We Ride about?

The song is about a couple – they’re just infatuated in love with each other but they enjoy doing these random, strange, on the edge sort of things and they don’t care what anybody else thinks because that’s just the way they ride. The chorus is like driving with the top down in the rain, rolling around in the red dirt in white t-shirts and doing all these things that people just go, “you guys are nuts!”

Lyrics and song ideas come about in really strange ways. One of the boys has a family member who was going through an issue with mental illness and I’ve also got a close family member who suffers from a mental illness as well. We were talking about how it impacts on the sufferer and the family, which is random but that’s how we came up with the song. We started writing it and Michael Delorenzis said, “Why don’t we write this song along the angle of these guys in love but they’re deemed by everyone as being crazy. They get off on doing these high risk, on the edge of life [things and] they don’t care what anybody thinks!” That’s how that song came about which is weird, but that’s just the way it works sometimes.

You’ve said before how surprised you were with the success of ‘Just Like Magic’. I imagine there was extra pressure to follow up with something equally, if not better than, that single and to keep that momentum going. Did you feel that?

Yeah, that’s a good point. Just Like Magic did far better than I possibly could have imagined. The fact that we were number one on just about every country radio chart in the country; then we were also getting played on KIIS FM in Sydney and on high rotation on Hot Tomato radio station on the Gold Coast. That was great to have a song heard on country and commercial radio, and [we’re] definitely hoping the same will happen with this new one.

You’ll be performing the single for the first time live during the single launch event at NightQuarter on the Gold Coast. I know you’ve done shows there before – why did you decide to go back for the official launch?

It’s one of the best live music venues in South East Queensland – you get a great crowd there every week. The venue’s fantastic! They’ve got a big LED screen up behind the stage now. The sound’s always great and they really do look after original music, which is a huge thing these days! They’ve been very supportive.

We launched the album [Live As One] there as well and it was a really successful night, so we thought it was an obvious spot to go for the single launch. [NightQuarter] is like an open air live market as well – there’s heaps of stuff going on there! It nearly looks like an aircraft hanger, that’s where they have all the live music. It is going to be good fun!

You filmed the official music video for ‘The Way We Ride’ with the award-winning team from The Filmery. What was it like filming the video?

I’ve never worked with these guys before but I’ve been admiring their work. They’re extremely good. I sent them the song, they instantly loved it and we worked from there on a concept of what we wanted to do. It’s shot in two or three different parts, but I went down to Sydney and Gosford and shot all of my parts. They shot a second lot of sequences in different parts of the clip. It’s very high energy. There’s a lot going on in it – red dirt, a couple, a convertible, there’s me in a studio, a live band … We used some drones and slow-mo cameras to capture certain parts of the clip as well.

I know it may be a little premature to ask, but in terms of working on new tracks for a new album – can we expect your musically-talented wife Michelle to sing on any of the tracks like she did on three tracks on the Live As One album?

I’d love to get her on another track. I won’t guarantee it though. She’s probably one of the busiest people I know at the moment. She’s working as an event manager and she just landed a full time job working on the Commonwealth Games, so her life is extremely busy at the moment! It might be a little difficult to pin her down to writing and singing a song – it’s that full on, it really is! Both of our lives are just out of control at the moment. I’ve been writing and recording new music, so the next 12 months are going to be really busy, but it’ll be worth it. We’re planning a couple of family holidays when we can squeeze it in.

And what a perfect segway to kick off the game I had in mind. I want you to pretend that you’re about to go on a road trip – a play on the way you ride. Money is no object and you can fly to any destination in the world. So first of all, what vehicle are you driving?

I’m going to go with the vehicle that’s in the music video. It’s a Mustang Convertible, it’s red in the clip, but I might go a black one. It’s pretty cool.

Who are you going with?

I’ve gotta go with Michelle, because there’s only room for one other person. The kid’s can stay at home (laughs).

Where are you heading?

I’d love to take her to Europe and drive down the Italian coast line. It’s stunning. That’d be pretty cool.

How long are you going for?

I reckon we’re going to need two weeks to do it properly.

What do you want to see?

I haven’t been back over there in a long time now, but I remember the Italian coast line is stunning – the views, beach, wineries, history and how spectacular the cities and towns are. It’s a great spot to drive and take it all in. That’d be pretty cool.

Swimming in the water there, is like nothing you’ll ever see! It’s just amazing colour blue and crystal clear.

What kind of accommodation do you stay in?

Sometimes when you stay in hotels, you can be anywhere in the world, they’re all pretty much the same; you don’t really get a taste of the culture and location. I think getting of the main roads and staying at Airbnbs, Bed and Breakfasts, places like that, would be really cool.

What do you eat?

If we stopped at some wineries and sampled some nice local cheeses then I know my wife would be very, very happy, so we’d have to do that.

I hope you sell enough singles to turn this amazing sounding trip into a reality! Can we expect to see you on the road soon?

I’m going to have to sell a lot so if everyone could download a copy, that’d be terrific! (laughs) It’s sort of ongoing, we’re calling it the Live As One tour at the moment and new dates are being added every week. They’ll be more dates coming – NSW, Victoria, I’ll try and get down to Tassie – so stay tuned.

For more on Casey, go to: www.caseybarnes.com.au
Or follow him on social media at: [Facebook][Twitter][Instagram]

Originally posted on the AU Review